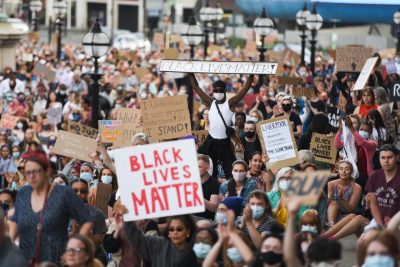 We wish to express our anger for the murder of George Floyd and our solidarity with all the victims of the racism in all its forms. We reject the criminalisation of the rioters and of those who support them.

Last Tuesday evening hundreds of people gathered outside St. George’s Hall in protest against the murder of George Floyd by the Minneapolis Police Department. This followed on from another solidarity demonstration on Sunday afternoon.

One hour before the demo, groups of people gathered with placards. By half past seven we were in our hundreds. To respect social distancing people spread out over a large area.

We paid tribute to George Floyd and to all victims of white supremacist violence in the USA.

We do not forget the reason we were out, en masse, during a pandemic, in a country whose public health response has been in the first rank of incompetence: a Black man was murdered by the police in the middle of the street, in broad daylight and in front of witnesses. The murderer of George Floyd expected this to go away.

This casual, lethal brutality is only the most visible aspect of American racism. Miserable poverty, social exclusion and mass incarceration utterly refute the myth of equality-before-the-law for citizens.

The UK is not, in anyway, innocent. British police forces operate with the same impunity and contempt for Black Life as their American cousins; the UK is as dependent upon White Supremacy to prosecute its existence as is the United States.

We call attention to British Police’s white supremacy, strengthened by racist “Stop and Search” laws and by the Conservative government’s courting of British fascists.

We call attention to the case of Mzee Muhmmad, an 18-year-old Black man from Liverpool who perished after being restrained and arrested in July 2016. Over a thousand BAME people have died in British police custody since 1990.

Americans have taken the streets in an astounding show of nationwide solidarity across all fifty states.

There have been peaceful protests and there have been riots. The latter appears to be the only language that the police and media take note of.

Some people have decided to burn the cities that exclude them. Some have attacked those who murder them with impunity.

To slander those who riot as extremists or infiltrators, or to frame their violence as morally equivalent to cop-violence, is laughable, contemptible, and not least of all, counterproductive.

We have seen cops gas and shoot unarmed civilians, who were, ten minutes prior, submissively “taking a knee”.

If Trump is the embodiment of American White Supremacy, American white supremacy, is howling, cowering and soiling itself.