Universal Credit is outright class warfare: an attack on all exploited and excluded people of society by the capitalist class and their lackeys in government. Below I aim to summarise the causes and consequences of this new system, and then outline a perspective through which resistance may be viable.

The British ‘welfare state’ has been rigorously cut down over the past few decades as part of a more general restructuring of the economy that began with Thatcher. There has been an ideological drive (often called ‘neoliberalism’) to reduce all aspects of society to products in the competitive market, slashing public spending, and undermining the collective power of the working class. Since the financial crash of 2008 this programme has only accelerated under the banner of “austerity”. Capitalists attempt to crawl their way out of an economic crisis at the expense of their workers, the State recoups the cost of bailing out the banks with public money, and it is the poorest who suffer for it.

It is in this context that the State has dismantled the “safety net” of old. Reduced benefit payments, stricter requirements, privatised assessments, more harsh and regular sanctions, and digitised procedures all cut back public spending while allowing for the retreat of the State from providing for public welfare. The new benefits regime serves to enforce work discipline (forcing us into low-payed, insecure work, obedient to our bosses) and abandon those deemed unproductive (such as the long-term ill and disabled). Clearly this is not only an issue for the unemployed: every waged worker faces the possibility of depending on benefits. The threat of poverty and destitution is intended to keep workers in line and generating maximum profits for the bosses. But also, more and more workers on the minimum wage, on zero-hours contracts, and on part-time hours are dependent on benefits just as much as those out of work. So we can reject manipulative stereotypes of “scroungers” and “cheats”; and we can throw out any self-defeating bitterness between the employed and unemployed. Universal Credit, in summary, intends to render us more easily exploitable, under ever worse conditions, while punishing those who cannot meet the demands of the capitalist economy.

The Institute for Fiscal Studies determined that “UC represents a cut in entitlements of £2 billion per annum”, particularly, “a significant cut in entitlements for the persistently poor”. In 2018, one in three UC applicants had their applications rejected: that’s 400,000 people. In the wake of Universal Credit, whole sectors of the British population are being pushed into poverty, hunger, and homelessness. The worst impact has crashed down on those unable to work due to illness, disability, or caring responsibilities.

From the outset claimants are put on the back-foot: there is a wait of at least five weeks before the first payment is made (often longer due to errors and delays), that means people quickly fall into arrears on rent, often leading to evictions. During this period many claimants depend on food banks to simply get by. Emergency payments can be requested, but these are simply loans that must be paid back through deductions on future benefits. Many turn to loan sharks. Either way, people are being forced into debt from the start. This is almost certainly by design: debt is an important means of controlling the population in our consumerist age.

In areas where Universal Credit has been rolled out for 12 months or more food bank usage has increased by over 50% and homelessness has soared. A recent United Nations report declared that the DWP is “designing a digital and sanitized version of the nineteenth century workhouse”. Wage-slavery has dropped its mask: a choice between exploitation and destitution is no choice at all. The same UN report states that Universal Credit brings in as standard the “imposition of strict conditions enforced by draconian sanctions for even minor infringements”. This is not the functioning of a safety-net but of a disciplinary tool.

Universal Credit also marks another set back in the struggle for gender equality. With its rigid focus on coercing people into full time employment, UC penalizes those shouldered with the tasks of reproductive labour – still overwhelmingly women. Reimbursement for childcare is delayed and well short of the mark, pushing families, especially single parents (90% of whom are women) into debt in order to take up work. UC benefits for a household are payed to a single person, essentially designated the breadwinner – an arrangement that not only reinforces the sexist division of household and waged labour but that also risks trapping victims in abusive relationships. In a society afflicted with shocking levels of domestic violence, this will have serious consequences.

The digital interface through which UC claimants must open and manage their claims has been described as a “digital barrier”. Due to both issues with the technology and varying degrees of computer literacy, people are less likely to be succesful in their claims and more likely to encounter errors and be subject to sanctions. This most severely effects older people, people with disabilities, and people for whom English is not a first language.

Universal Credit has worsened the systematic neglect and injustice that mentally and physically disabled people face every day. The removal of disability premiums, the multiple barriers to accessing assistance, and the outsourced Work Capability Assessments (that consistently label people fit-for-work against the advice of doctors) all combine to create a real crisis. Disabled People Against Cuts (DPAC) have led the way in demanding that Universal Credit be scrapped.

This is a pointed attack on the poorest and most vulnerable by our arrogant and callous political elite, who serve only the interests the capitalist class. Resistance is possible, however, in the form of class struggle. Through direct action and mutual aid we can help each other to survive while creating real change. If we are to fight back, we must build up compassionate and reliable solidarity between benefits claimants and the rest of the working class.

Populists try to divert our anger towards immigration, blaming “open borders” and “foreigners” for our poverty. Yet it was bankers, not foreigners, who crashed the economy; it was our bosses, not immigrants, who froze our wages and outsourced our jobs; it was our landlords, not refugees, who put up our rent or sent us packing; and now it is our “sovereign” government, not any external scapegoat, that is imposing this new benefits regime on us. Class unity involves overcoming harmful divisions of nationality, skin colour, gender, or sexuality.

The institutions of capitalism undermine the collective strength of workers by separating us into individuals, relating to each other only through state administration and commodity consumption. Our communities have been eroded and destroyed, leaving us powerless and unable to escape the rat-race. But we can regain this power if we transform our individual defiance into collective struggle. From first sharing our pain and anger we can move on to coordinating our resistance – creating new communities, or rediscovering old ones, in the process.

We can’t stop at half-measures: Universal Credit cannot be reformed, it must be scrapped. We don’t have faith in any political party or charity do this this for us, we will have to take direct action for ourselves. The first step is to discover and build connections with those around us who share our desire to put up a fight. Liverpool Solidarity Federation is taking this first step: you can get in contact via email, or find us outside one of several job centres in Liverpool every week. 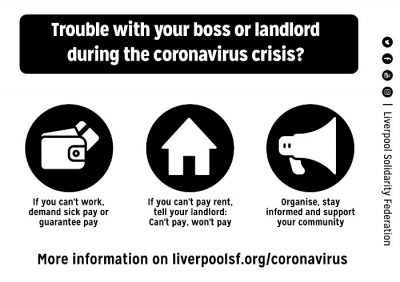